The Trend is Our Friend

For weeks now, I have been tracking the COVID-19 infection numbers.  I began on March 21st, and since then have waited anxiously every day for 12:00 noon when the State of Louisiana Department of Health releases its update on the number of confirmed cases, deaths, and number of severe cases (requiring hospitalization).  Initially, the data was very erratic (volatile) where one day the numbers would surge and the next would show a slower growth.  We later learned that this was due to the lag-time from test completion to reporting and the inconsistency of the same.  On March 31st, I was very shocked to see a 30% increase in cases over the previous day, and then on April 1st it was back down to 23%.  However, this turned out to be an April Fool’s joke because April 2nd the growth rate was 42% over the day before.

The past week has provided some more consistent information and we now have enough data to begin to analyze trends.  I use my research skills to analyze investment markets, but recently I have been obsessed with finding reason in an unreasonable environment.

Today, I feel comfortable stating that there is clearly a trend that the social distancing efforts in Louisiana and specifically New Orleans have begun to have an impact on the spread of the virus.  On April 4th, we saw a 21% growth rate over the previous day and that has declined significantly with only a 4.5-percent growth in cases over yesterday’s number.  But, day-over-day changes have been inconsistent, as stated previously.  To smooth these results, I created a 7-day moving average growth chart, which provides a better look at how the numbers of new cases look in comparison to the past.  The graph below shows a couple things developing in the state.

The Bar Charts are the number of cases in blue and the 7-day moving average in new cases in red for Louisiana.  As you can clearly see, we had a surge in new cases on Day 13 (April 2nd) and then the number of new cases has steadily declined.  And, the red line shows that we are clearly “flattening the curve”.  In the Line Graphs, the grey line is the growth in new cases from the previous day and the yellow is the 7-day moving average of growth in cases.  These too show a very supportive trend with the growth in new cases steadily declining, though erratic, but the 7-day moving average clearly on a downturn.  All four graphs display a good trend both in number of new cases and the growth rate of new cases as Governor Edwards has also reported during his daily press conferences.  These charts support his recent assertion, that “the mitigation efforts are working”.  But, to also quote him, “they are working which is why we need to continue this effort”.  In no way is this commentary insinuating that we are sounding an “All Clear” message.  Additionally, this graphic only represents Louisiana.  Georgia is on a much higher growth rate right now, and some parts of the country are just now picking up steam.  If “social distancing” is enacted in those states, they may avert the most severe impact of this virus. 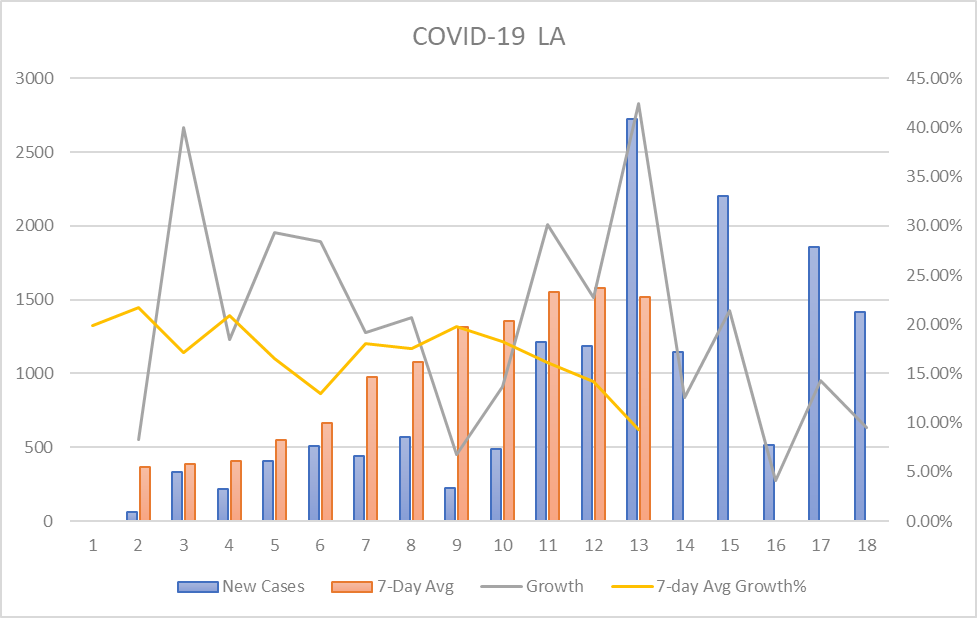 What is now clear to me is the US economy will likely slowly return in managed segments. New Orleans may find itself opening, while other parts of the country will stay under a “shelter in place” mandate for non-essential workers. However, regardless of how this progress, we will see the social distancing as a way of life for some time to come. Offices as well as other businesses that operate in close quarters may be forced to take longer term measures such as staggered working hours and limited entrance to public restaurants and bars.

Personally, I see this lasting a lot longer for some industries and less for others. The truly concerning is the impact to retailers who were already under stress and entertainment venues who operate on a very thin margin that employ workers who live paycheck to paycheck. Restaurants, bars, and movie theaters immediately come to mind. They employ a large portion of the population and if they are not back to work sooner rather than later, what is likely a recession becomes more likely a depression.

The good news is a vaccine does seem to be in trials and radical forms of treatment for those infected seem to be working (platelet therapy). These give me comfort that we are moving back to a normalized environment in the relatively near future. However, what this means to the world economy long-term is hard to predict with unemployment at record levels, behavior patterns altered, and a general sense of caution. Many will offer their opinions on the matter, often with supporting research. However, as I stated in my commentary, “Models are no Better than Weather Reports”, there is no road map for this event and no historical period from which to infer. The H1N1 pandemic was in 1918, and at the end of WWI. WWII was equally impacting to the world economy, but we were more of a national economy at that time. Markets then operated much different than they do today, with each national economy relying upon the other in some way.

The one thing that rings clear to me is that we are resilient and adapt quickly. Human ingenuity is impressive and we are now working better together as cultures, if not governments. The one prediction I feel comfortable making from all of this is, “things will change”. That seems to be an easy prediction.