By: Andrew B. Noto

Last Friday wrapped up a September that equity investors would like to forget. The S&P 500, Russell 3000, and Dow Jones Industrial Average all retreated greater than 9% for the month. August’s CPI data earlier in the month started the selling. It was exacerbated as investors digested the comments of the Federal Open Market Committee’s (FOMC) chairman Jerome Powell’s comments after their meetings later in the month where they decided to raise the Federal Funds Target Rate by another 0.75% and hinted at the rate increases continuing to try to tamp down inflation. The idea of a recession became more of a reality to many investors as consumer sentiment remained at deflated levels like those of the Great Financial Crisis in 2007-2009.

Fast forward from Friday’s close to today’s close, Monday, October 3rd, and investors saw green across the board rather than the red they have been accustomed to. The S&P 500 jumped 92.81 points (2.59%) and the Dow Jones Industrial Average spiked 765.38 points (2.66%) in a day where all sectors of the market gained ground. Some market pundits are calling this a “dead cat bounce” or attributing this to “short covering” by bearish investors.

Regardless of the catalyst, days like today always remind me of a data point that was shared with me during the fourth quarter decline in 2018. That quarter saw the S&P 500 down over 19.6% at one point as the FOMC raised the Fed Funds Target Rate by 1.00% that year, the most aggressive action since the Great Financial Crisis. The data showed what happened when investors missed the best days in the market and the effects it had on the compounded returns of the portfolio. I found an updated version of that data which can be found below. According to BlackRock’s “Strategies for volatile markets” chart below, investors who stayed invested in the S&P 500 index for the entire twenty years from 2002 to 2021 saw returns of 516%. If an investor missed the five best days during that same period, their returns fell to 289%, a reduction of 44% by missing just five days. Those that missed the ten best days saw their funds grow by 182% and those that missed the twenty-five best days during those twenty years saw meager returns of 34% over twenty years; that is less than 2% per year when annualized. 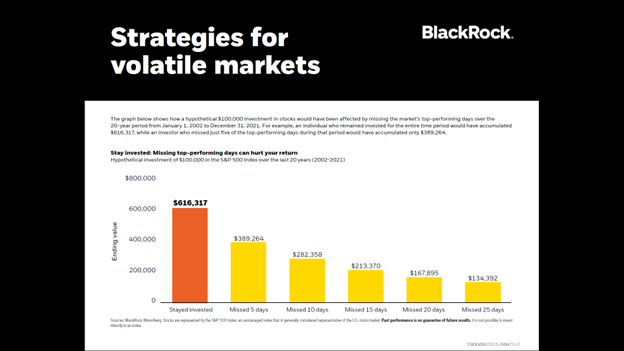 As investment advisors, we are often asked by clients if they should go to cash or consider switching asset classes for calmer waters during volatile periods in the equity markets. Sometimes that can be the prudent action depending on an investor’s time horizon, risk tolerance, or goals, but it is important to remember the long game and your personal goals before making these important decisions. There will be periods of short-term discomfort when it comes to investing in equities and mixed into those periods will be days like today with substantial increases. After seeing the consequences of missing these banner days, sometimes it doesn’t pay to sit on the sidelines of the equity markets.