By: Andrew B. Noto

It was quite an eventful week. A week that was likely dictated by the actions of the Federal Open Market Committee and the words of its chairman Jerome Powell. At today’s close, the Dow Jones Industrial Average, S&P 500, and Russell 3000 all closed the week down more than 4% despite being slightly in positive territory early Wednesday afternoon. On the fixed income side, the one-year Treasury yield rose above 4% this week for the first time since October of 2007 as it ended the week with a yield of 4.125%. On January 1st this year, the one-year Treasury was yielding a mere 0.10% so that is a move of over 4% in just nine months. We would consider that a significant move. 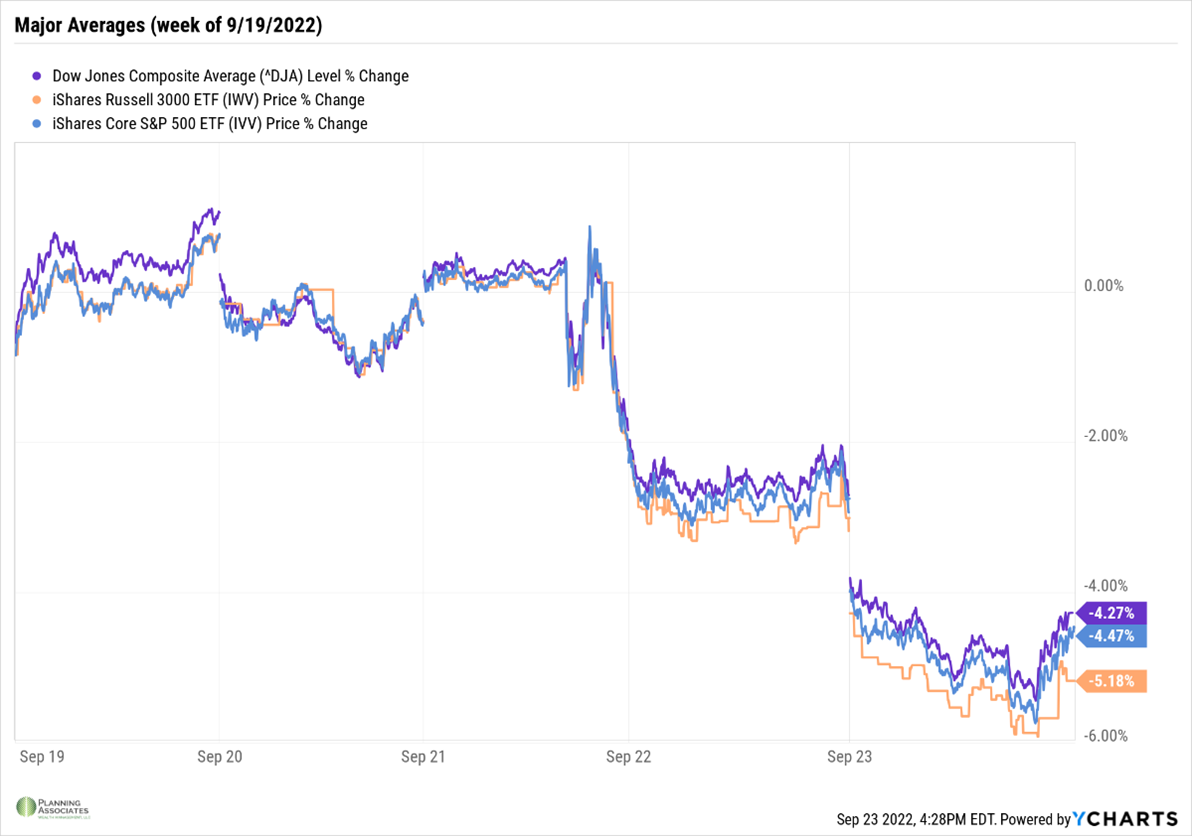 As mentioned in the opening paragraph, the major equity indices were trading sideways midway through the week, but everyone had their eye on the FOMC, their actions, and more importantly, their words. During Federal Reserve Chairman Jerome Powell’s speech after their meeting on Tuesday and Wednesday, he revealed that the FOMC decided to raise the Federal Funds Target Rate by 0.75% which was widely expected by most investors. So, the question is why did the market react so poorly to the news of an expected rate hike? The answer is in the words of Chairman Powell.

The last time we heard from Jerome Powell was during his speech last month at the Federal Reserve Bank of Kansas City’s summit in Jackson Hole when he stated that the committee is committed to price stability and will work diligently towards that goal. During his speech after the FOMC meeting this week, he used the words “pain” and “restrictive” seven and twelve times, respectively. He reiterated the committee’s commitment to price stability but mentioned that it is going to take a “restrictive” policy that will cause “pain” for some areas of the US and global economy. Chairman Powell also provided inflation expectations which were a bit higher than previous iterations. These sentiments sent equity investors to the exits as they are expecting money to be harder to come by, further declines in equity prices from their current levels, and an extended period of above-average inflation.

In speaking with clients lately, we have remained cautiously optimistic as we felt like the mid-June lows of the equity markets could be tested, as they were today. After digesting this week’s news, we can see a scenario where we could experience further declines in the equity markets though providing a numerical value to the decline would be an educated guess. But I mentioned that we have some areas of optimism and one of those areas is the fixed income market. Though the Bloomberg Aggregate Index has seen a price decline of 13.5% year-to-date, bond yields have increased substantially. As we mentioned in the opening paragraph, the one-year Treasury yield has increased over 4% since the start of the year. This means that the fixed income component of investor’s portfolios should begin to provide some sort of income benefit in the coming months to years after an extended period of historically low yields.

We remain confident that this is not a time to panic. The consumer balance sheet is still strong. We will learn more about corporate earnings as earnings season commences next month, this will give us a better understanding of the inflationary effects that businesses are feeling. Additionally, there are still more job vacancies than unemployed workers, so the job market remains strong.