We are Back and So is Inflation

It has been a while since I have written a commentary on the markets. This was due to several factors, including: the birth of our first grandson, sending our youngest son off to Army Basic Combat Training, and evacuation for Hurricane Ida.  But mostly because the market has continued its rise as expected and I didn’t have much to add to the conversation. However, about a month ago, things began to change. The inflation data has been looking a little more persistent and less transitory (short-term) than expected, the Delta variant of COVID-19 was increasing in contagion, and earnings were beginning to show some signs of slowing from the rocket pace off the lows of last year.

Yesterday, the market showed some signs of weakness to the tune of about a 1.78% decline from Friday’s close. The Dow was down as much as 940 points (about 2.7%) around 2 PM. That will get anyone’s attention! But as the trading day approached the closing bell it recovered about a third of that loss.

We started to write a commentary back in late August about the issues swirling around the U.S. and the world, but Ida did a nice job of slowing that progress. Some of what is written here was planned for a previous commentary, but it still applies.

Recently, the inflation data has been eye-opening, especially used cars and truck prices which are up 75% over last year. If you have been thinking about selling your old car and getting a new one, now might be the time if you can find a new one. Some other notable increases, gas (46%) and lodging away from home (55%) . Inflation is what happens when many dollars are chasing fewer goods. Not sure about you, but I see few goods on the shelves due to the pandemic and the subsequent shutdown. For those of us in the New Orleans metropolitan area, you saw how a disruption in the supply chain (Hurricane Ida) exacerbated these fewer goods, even if it was just for a brief period. Additionally, central banks around the world have printed trillions of dollars of new money to chase those goods.

While we do not believe inflation will continue at the current pace, prices will likely continue to persist at this level. Sure, used cars will go down in price once auto makers can make cars at the pace of demand, but hotels will likely stay at inflated levels for some time, as will other goods and services.

The economy shows no signs of slowing down and the market may follow suit.  Remember, stocks and bonds are goods as well, purchased in the “market”.  If people keep purchasing shares and bonds irrespective of their worth, then they will continue to increase in price.  However, what about yesterday?  What caused the market to decrease yesterday?  The simple answer is concerns about the Delta variant and the impact of the potential failure of China’s largest real estate developer, Evergrande.

The following chart shows the three major surges in COVID-19 cases beginning in January of last year, the second began around the holidays, and most recent the emergence of the Delta variant and it spread. 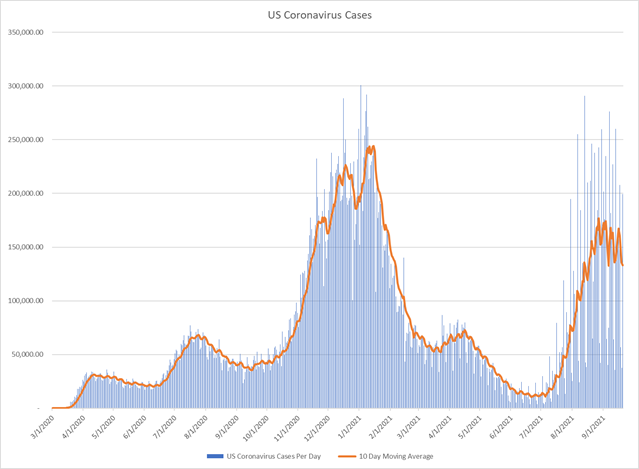 Hospitalizations are also on the rise, mostly those unvaccinated, but recently that seems to be in decline as shown in the next graph. 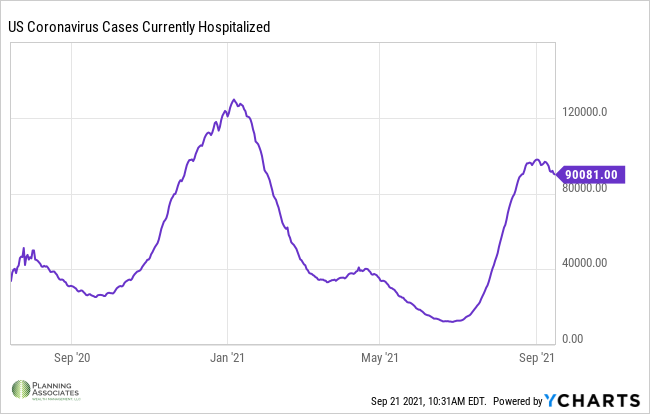 However, what is remarkable, the number of deaths is not increasing at the same rate of infections and hospitalization.  In fact, the death rate from COVID-19 is 1.6% and has been at that level since about the first of the year when vaccinations began to roll out, and after more than 22 million had been diagnosed. 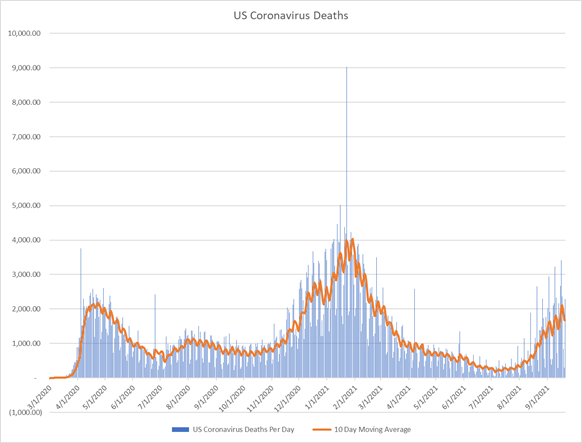 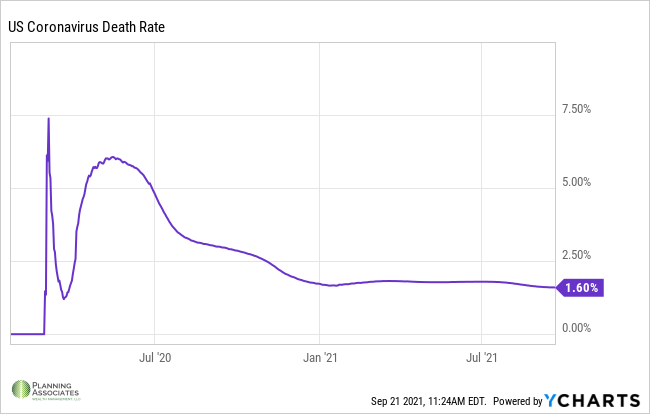 Today, more than 63-percent of the population have received at least one dose of one of the vaccines.  With 42 million people having contracted the virus (including my wife and I), we can assume that we are approaching herd immunity in the United States as more people are gaining some resistance to the virus whether it is through vaccination, infection, or both.  The chart below shows the current vaccination rate in the United States of any dosage of the COVID-19 vaccine. 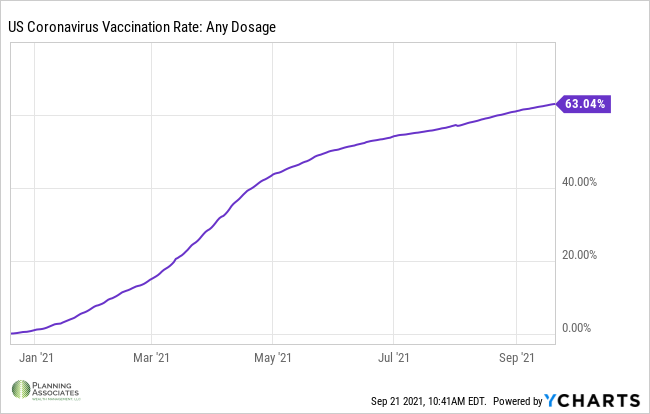 So, it is not likely that we will be back to widespread lockdowns and thus shutting down production. However, we are still dealing with an employment issue much more than the virus itself. Many simply have not returned to the workforce due to fear, governmental handouts, and lack of skills. With 10 million job vacancies and 9 million unemployed, there are plenty jobs to go around. Many firms are hiring without the necessary skills and investing to train, but unfortunately, that does not seem to be successful across the board. So, wages will likely continue to increase and with it prices.

One of the most concerning issues, in my opinion, is the volume of money in the economy, accompanying the lack of production. As the following graph shows, the money supply since the start of COVID has increased by five-trillion dollars (25%) and that is only in the United States. Central banks around the world have printed money at a similar relative pace. 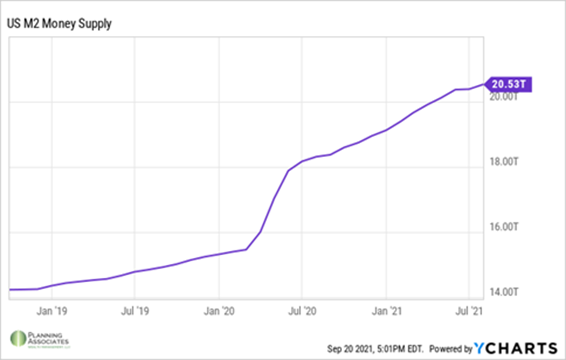 This certainly has led to the current inflationary pressures, and if not addressed soon, it may lead to a long-term situation. If inflation is persistent, it will have a negative impact on our recovery. One example is the recent increase in wages, has been entirely erased by the increase in the cost of goods. What good is a raise if it only covers the cost of the things you need to purchase. This impacts the poor and middle class disproportionately, as a large portion if their spending is not discretionary. When prices go up, the wealthy can simply choose to stop purchasing many items, but that’s not the case for the majority of people. 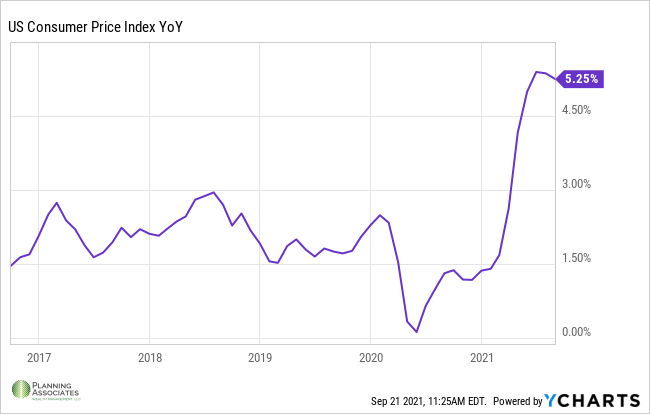 Both of these issues have the potential to impact the markets as moderate inflation helps move markets higher and emergence from COVID restrictions allows productivity to increase, more products are produced to meet demand and things return to normal.  But, to reign in inflation, the Fed must remove some of that 5-trillion dollars they printed to reduce the money supply.  That is not going to be easy!  They are beginning the process of reducing the purchases of bonds in the market (tapering) and the last time they tried it, we had a “Taper Tantrum” and markets declined significantly.

Another potential issue is Evergrande is the largest Chinese real estate developer who currently has about $53 billion in debt that is coming due by April 2022[4].  They appear to be in financial difficulty, as they have not paid many vendors and investors have been due funds that they have not received.  In light of their difficulty, construction has stopped at many of their properties.  Chinese citizens have paid hefty deposits ($100,000 or more) for homes that were being produced and they have no way of getting their money back unless they take legal action.

If you are wondering why we should care in the U.S., many firms have loaned funds to Evergrande or invested in their business, including U.S. and European firms.  We do not yet know the extent of this issue, as it is somewhat difficult to gain information on Chinese based firms.  Our firm has been concerned with China for some time given the tension between our two countries and the recent crackdown by the ruling communist party on businesses operating there.  As a result, we reduced our exposure to the region earlier in the year, and do not plan to increase exposure for some time.  However, the impact of a financial failure of that magnitude and contagion in financial markets is hard to predict.  So, even if not invested heavily in China, it could impact U.S. firms and that could and likely would impact the overall market.

So, while we remain positive about the stock and bond market, we do have concerns that things could get a bit choppy.  That means, days like yesterday could be a bit more common.  However, remember, if inflation is heating up, you must increase your assets to keep up with inflation and the equity market (stocks) offer one of the best hedges against inflation.  Therefore, we recommend staying the course if you have the correct balance between stock and bonds.  Also, as I ALWAYS say, be sure to have ample emergency reserves (3 to 6-months of expenses) in cash or cash investments that can easily be liquidated to pay bills if necessary.

If you would like to discuss this or any other topic, please call or shoot us an email.